A passport is a traveler’s best friend. It is the means of travel abroad. If you have a valid passport, all you need to do is apply for the visa and book the tickets and you are set to go. Sometimes mishaps happen that might damage your passport. A damaged passport is not something that can be avoided or ignored. If you realize that your passport has been damaged in any way, it should be replaced immediately. If it is not immediately replaced, overseas travel will be put on hold. Replacement of damaged passport might take time, based on its condition. If the damage is so bad, that it becomes difficult to identify the person, it takes a lot of time and effort. Corrections can be done by following a fixed procedure; but it will require a lot of running around as well as police verification, amongst other things. The most common is the water damaged passport.

For fixing the problems that you might face in case of any damage, filling up the damaged passport form is the first step. Depending of the amount of damage caused to the passport, the replacement procedure differs. Based on the extent of the damage, it is classified into two major categories – 1. Passport number is visible, name of the holder can be read and the photo is in place, and 2. It is damaged to such an extent that none of the above details can be revived from the document. The procedure in different countries in mostly the same- they require an application form to be filled out, identity proof, photograph, and proof of citizenship, along with other details, depending on the country of residence. It is important for you to replace damaged passport as soon as possible.

There might be a lot of problems that occur, due to a damaged passport. A passport is a medium of identification, which can serve as an address proof, as well as, identity of a person. No other identification card of a person can be used as a proof of both of these. If a person does not have a passport, or his passport has been damaged, he will have to produce two identity cards at any given time. Thus, keeping your passport in a good condition is of utmost importance. A passport might be destroyed in different ways, like by water, wear and tear, rough use etc, to prevent this from happening, it is best to take precautions and keep it safely in a place where it won’t be destroyed. When traveling, more precaution should be taking care of its safety. Also, if a passport is destroyed when overseas, it would create a lot of risk for the traveler.

The procedure of getting a water damaged passport is more or less in the same way as others.

Ensuring Safety of Passport, When Traveling

Safety of passport should be the number one priority, when traveling, and even otherwise. But it is not entirely in our hands. If by any kind of ill fate, something happens to the passport, which is not in our hands to stop, like natural calamities, etc, then we have to look at verifying the damaged caused to the passport. For this we need to follow a procedure, authorized by the Government. This varies a little from country-to-country. But if we follow the procedure properly, then it is not much of a hassle. It will take some amount of time for sure, but the main this is getting it done- for rectifying it so that it can be used again, as an identity card, as well as a means to travel overseas. So, it is finally known that the methods to replace damaged passport are not very hard. 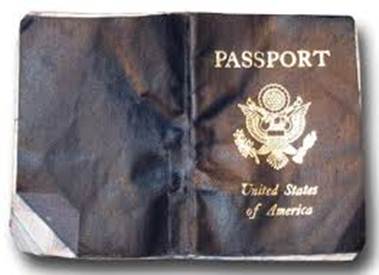 Precautions to be taken to Ensure Safety

Find out if a passport is required to enter a particular country- since 80% countries require it, and if you reach the country without the required documents, permission to enter will not be granted.

Always keep a passport in person. On reaching the hotel, don’t leave it lying around is the hotel room; keep in the provided safe. Also never let the passport go out of your site. And keep it away immediately after the work is done. If case you do get your passport damaged, the damaged passport form will come to your rescue.

Ensure to renew the passport before its expiry date. Keep it in a safe place, like your house safe, or if you don’t have that, consider putting it in a safety deposit box at the bank.

Thus, we know how important it is to keep a passport safely and prevent it from damage of any sorts. Being the most important identity of a person, it has great value.